How to be unprofessional 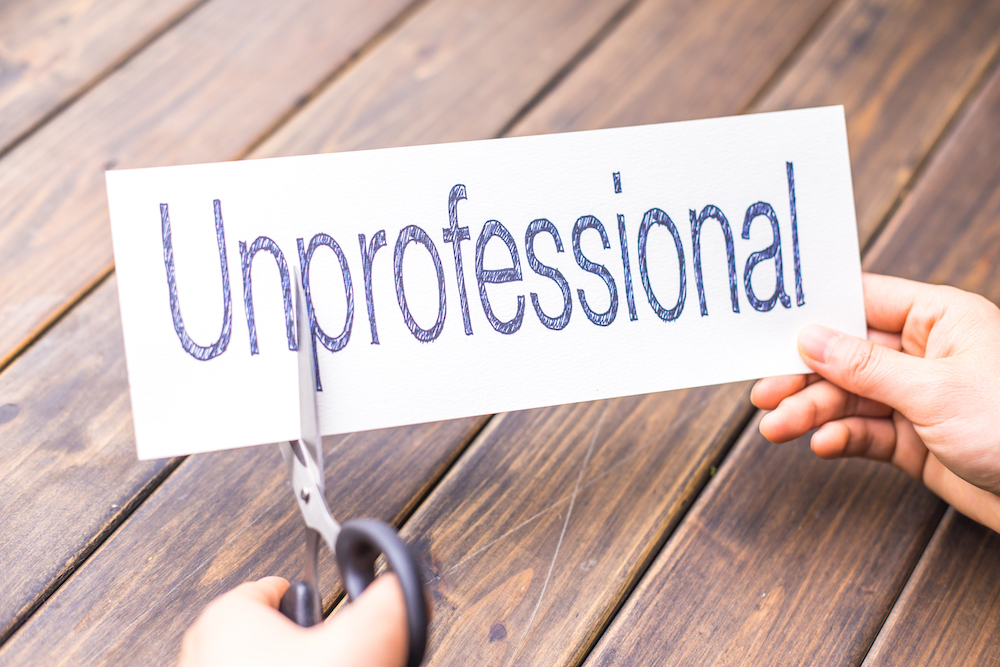 During the summer, I made contact with a potential new client on LinkedIn. Communications were smooth and friendly, and the other person (let’s call her “Amelia” – not her real name) was keen for a meeting along with her colleague. So we met after she came back from holidays.

Amelia was in charge of a group of people who needed to present well to get funding, development, and customers for the new business ideas they were developing in technology. Amiable and enthusiastic, by the end of our discussion, we had agreed that I would introduce the idea of developing presentation skills in an interactive, paid demo lecture to her team as a whole, then they would organize a schedule for the autumn whereby I could continue the training with them in a practical way in small groups.

I gave Amelia a preview of my demo a few days before the real thing. She made some suggestions for small changes. In the actual demo, the audience was very attentive, and I got excellent feedback from both Amelia and the members of her team. She took me to lunch afterwards and we parted company with the understanding that we would start presentation skills training soon and that I should get in touch during the next week to talk details.

I didn’t hear from Amelia again for three weeks.

My first email was four days after the presentation. I thanked Amelia once again for the opportunity to present to her team, and offered some suggestions on what we could do next, including how to organize the groups for training and our contractual arrangements.

One week after my first email, I sent another message as a reminder. This time, I showed understanding that she might be too busy to respond on email, so I offered time to speak on the phone.

After waiting a second week, I realized email was not working, so I tried to call. No answer. I also called Amelia’s colleague, who had been in the first meeting. No answer there, either. So I wrote a text message to Amelia and waited.

Two days later, I got a phone call from Amelia. Her excuse for not contacting me was that she’d been travelling (although she said the trip had taken only one week). She was very polite and apologised for not being in touch. We discussed the content of my email on how to proceed, including my bill for the demo and that I should draft a contract for our planned work together. Amelia said that she doesn’t always have time to write email, so phone calls would be the best way to contact her. She also informed me that she would be very busy and travelling for a while, so I should wait at least two weeks before contacting her. The three-week lack of contact was a bit strange, but she sounded perfectly reasonable, so I took her at her word.

I didn’t hear from Amelia again for nearly six weeks.

Six days after our phone call, I sent the invoice for the demo to Amelia. I noted that I didn’t expect an immediate reply. My understanding was that she or somebody else would get back to me with the necessary paperwork to ensure I got paid. The payment period was 14 days, so I thought this would be taken care of quickly.

Nine days later, I sent my draft contract with the understanding that Amelia would look over it, we would discuss changes, and come to some agreement. She had told me to wait “at least” two weeks, so I thought that if she’d just got back from travelling, this was a good time to send the contract draft – two weeks and one day after our phone call.

Twelve days later, I thought that there had been plenty of time to read my draft and pay my bill. I’d received no response to the draft and I hadn’t been sent any paperwork or been paid. So I called Amelia. No answer.

Two days later, I called her again. No answer.

Four days later, I called her again. No answer. So I wrote an email requesting contact. I said that the invoice was now two weeks late, please pay it. I mentioned the contract draft again. I listed the times I’d tried to call her. I received no reply.

In the meantime, I saw that Amelia had been quite active on LinkedIn. She wasn’t on holiday or sick leave or in some other way indisposed. She was around. She just chose not to respond to my attempts to get in touch.

One week later, I sent a final email in which I wrote plainly that I’d been sending emails for more than a month, and I’d been trying to call her for two weeks. If she did not pay me within the next five days, I would consult a debt collector to ensure I got paid.

Thirteen minutes later, Amelia sent me a reply on email.

Amelia offered her “sincere apologies” for not paying, but she implied it was my fault, she never mentioned the draft contract (even though she’d asked for it) and she never gave a reason why she had ignored my many attempts to contact her. She came across as very disingenuous.

Let’s be absolutely clear here. I’m not writing this blog post because I’m bitter about losing a contract. Sometimes contracts fall through – I get that. Maybe somebody doesn’t like the way I do things, the business situation changes, the budget dries up, time for the project is no longer available. It’s part of the risk of doing business. That’s life and I accept it.

What I don’t accept is rudeness and dishonesty. Amelia treated me very poorly. I was not barraging her with messages and calls – I gave her plenty of time to respond. If she didn’t like the way I teach presentation skills, she shouldn’t have given me good feedback. If the business situation changed, or there was no budget or time anymore, she shouldn’t have asked for a contract.  A contract is a serious document. If you request it, it’s your responsibility to acknowledge that you received it, so the sender knows that it was delivered. After that, your task is to make comments to refine it and come to an agreement. If you don’t like terms, you should say so, and give reasons why.

You can safely disregard unsolicited messages, but if you ask somebody to contact you, and then you ignore them, it looks bad. It looks even worse when you’ve agreed to do business. NEVER ignore the sender when you have specifically asked them to contact you – that’s both unreliable and rude.

This whole charade has made Amelia look dishonest, and by association, she has tarnished the good name of her otherwise very respectable employer. It caused me a lot of headaches as I tried to deal with the situation.

Honesty is essential in business communications. A lack of honest communication stops cooperation, planning, negotiation, discussion, and mutually beneficial business for all. If you are irresponsible, you can be sure that the story will get around. Dishonesty and a refusal to communicate destroy trust and credibility, along with your reputation.

Reputation can make or break your business. Don’t sabotage yours by being unprofessional.